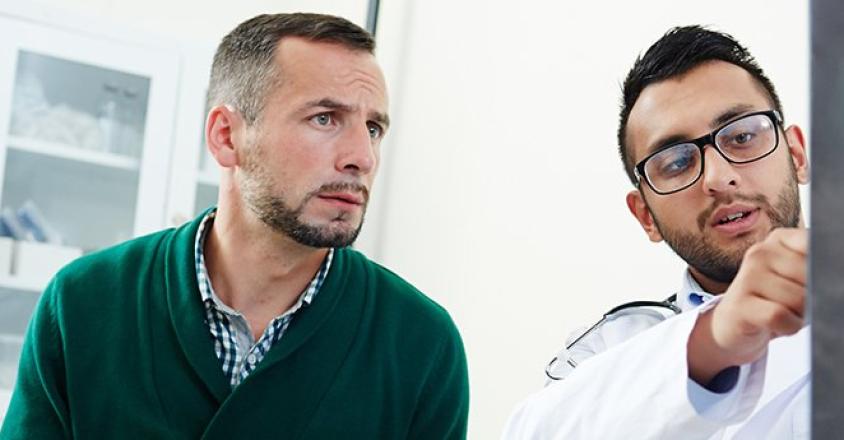 Lung cancer. Just mentioning the condition may increase fear and loss of hope — and for good reason. Lung cancer kills more Americans every year than the next three most common cancers — breast, colon and prostate — combined, according to the American Cancer Society.

But even as the most commonly diagnosed cancer worldwide (excluding non-melanoma skin cancer), with 2.1 million new cases in 2018, it’s important to understand the myths and facts surrounding lung cancer, according to hematology and oncology specialist Shyamal R. Bastola, M.D., Genesis Cancer Care Center.

“There are three important messages about lung cancer we need to focus on: prevention, understanding increased risk and how we can decrease that risk, in addition to knowing there’s a tremendous improvement in treatment options,” Dr. Bastola explains. “It’s both the personalized prevention and treatment that has changed what we think of lung cancer.”

To help overcome the unknown lung cancer often represents, Dr. Bastola provides much-needed insight on the myths and facts behind the condition:

Myth #1: Only smokers get lung cancer

Fact: While most lung cancer cases are related to smoking, nonsmokers can get lung cancer, too. Causes of lung cancer in non-smokers include secondhand smoke, or smoke from burning tobacco products and smoke that has been exhaled by the person smoking.

Environmental exposure to certain hazardous chemicals including asbestos, uranium, arsenic and some petroleum products, in addition to air pollution can also cause lung cancer in nonsmokers. “Radon exposure has also been shown to be the second-leading cause of lung cancer,” states Dr. Bastola. “Anything that causes chronic irritation of the lungs increases the risk of lung cancer, with the same concept applying to vaping, where there is good data showing it can cause significant lung damage.”

Fact: While lung cancer is an equal opportunity disease, with the American Cancer Society estimating about equal numbers of new cases for both men and women in 2020 (116,300 in men and 112,520 in women respectively), invasive breast cancer remains the biggest threat to women. In fact, it’s projected 276,480 women will be diagnosed with invasive breast cancers in 2020. “Lung cancer may present an increased risk over breast cancer for women in terms of dying, but breast cancer remains the most common cancer diagnosed among women in the United States,” Dr. Bastola explains.

Fact: It’s true lung cancer does not show obvious symptoms until it reaches an advanced stage, yet timely detection is aiding early diagnosis and successful treatment.

Cancer has five stages: stage 0 (carcinoma in situ, or a tumor that is confined to its site of origin and has not invaded neighboring tissue or gone elsewhere in the body), stage 1, stage 2, stage 3 and stage 4. Lower stages indicate the disease is more localized, or contained, whereas higher stages refer to cancers that have spread into other areas of the body. Due to obvious symptoms including a cough that won’t go away, coughing up blood or significant weight loss not obvious until later, 75% of lung cancers are diagnosed when the disease is advanced or has spread to a new part of the body (metastasis).

But, those at high risk of the disease can greatly benefit from a screening test called a low-dose computed tomography (also called a low-dose CT scan). This screening is recommended for adults between the ages of 55 and 80; those with a history of heavy smoking; those who smoke now or have quit within the past 15 years; and those who have a cancer history or family history of lung cancer.

“Earlier detection is helping patients get diagnosed at earlier stages, providing them with a better chance of a cure,” explains Dr. Bastola. “From 2007 to 2016, new cases have dropped 3% every year for men and 1% each year for women, primarily due to decreased smoking.”

Myth #4: If I’ve been diagnosed with lung cancer, it doesn’t matter if I quit smoking

Fact: The best thing for anyone, at any time — no matter how long they’ve smoked or if they have been diagnosed with lung cancer — is to quit smoking, according to Dr. Bastola.

“If someone has been diagnosed with curable lung cancer or stage one, then it certainly would be very helpful to quit to prevent future lung cancers. And if you can quit before you were diagnosed, then you can decrease your risk tremendously,” he states. “Even if you’ve been diagnosed at a more advanced stage, quitting smoking may decrease the risk of toxicity from treatment. For example, if you’re undergoing radiation and you continue to smoke, the risks of having complications could increase.”

Fact: There is a surprisingly common belief that if lung cancer — or any cancer — is exposed to air during surgery, it will spread; but there’s no medical proof supporting these beliefs. The reality is that often despite having surgery, the cancer progresses for many other reasons. And if you’re diagnosed in the early stages, surgery is the only thing that can cure cancer. “The longer you delay surgery or don’t have the procedure because you’re worried it can spread, then it will,” Dr. Bastola states.

Fact: The best news regarding lung cancer centers around treatment advances, which have dramatically advanced over the past few years for the better. “With new treatments, the life expectancy or the expected benefit of treatment for advanced lung cancer has improved significantly,” explains Dr. Bastola.

A group of medications called immunotherapy has made the biggest impact for those being treated, including the medications KEYTRUDA® (pembrolizumab), OPDIVO® (nivolumab) and TECENTRIQ® (atezolizumab). “We can also tailor other oral medications after testing each patient’s specific biomarkers as well as mutations that help us decide what treatment will provide the best possible outcomes,” he says.

“Just four or five years ago we would almost never have somebody with stage 4 lung cancer live for five years or longer,” states Dr. Bastola. “Now we’re seeing this happen for more and more patients.”