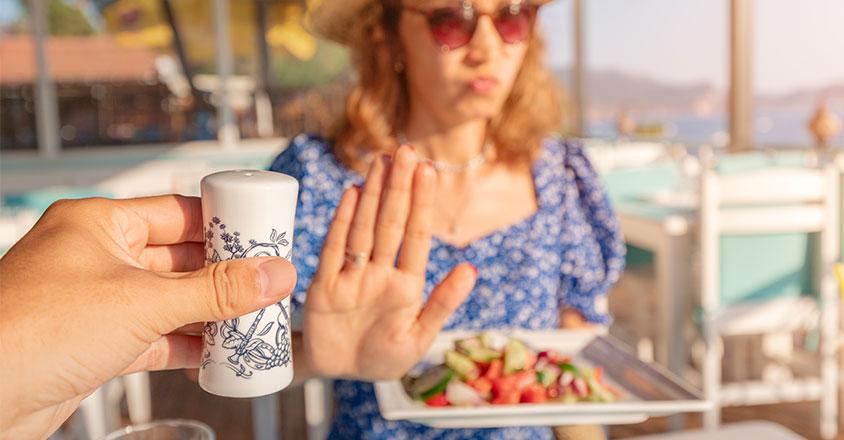 While sea captains might be accustomed to inhaling salt daily, most of us could stand to limit our salt intake. Just like the sea water surrounding the captain’s ship, salt comes at us from every point on the compass.

In the early days of exploration, food used to be packed in salt so it wouldn’t spoil during travel, but now we have huge freezers and salt’s still everywhere, especially frozen foods. Blimey! More than 70% of the sodium we eat comes from processed and prepackaged grub. There’s also an ocean of salt in breads and rolls, pizza, sandwiches, cold cuts and cured meats and soup.

Salt and sodium are different. Sodium occurs naturally in foods or is added during manufacturing. Table salt is a 40 to 60% mix of sodium and chloride. One teaspoon of salt has 2,300 milligrams of sodium, which each crewmate is supposed to have each day. Most of that is in what the chief cook prepares. Many people add about 1,100 milligrams extra per day. Shiver me timbers!

We all need a teaspoon of sodium a day for health but diets any higher in sodium are associated with high blood pressure (hypertension), which burdens your heart. Increased blood flow can harm your heart, brain, kidneys and eyes. It raises the risk of heart attacks, heart failure, stroke, kidney disease and blindness. Not exactly ship-shape!

Sure, there are sodium substitutes. Many contain a lot of potassium, which is bad for those with kidney disease. Check with your family doctor before trying salt substitutes. And sea salt? There’s very little sodium difference between sea, table or kosher salt.

Salt’s boring, anyway! Sea captains have sailed every ocean blue and found many great alternatives like cider vinegar for vegetables — salads and sauces. Allspice really gives lean meats and stews a kick in the britches. Try cayenne pepper on eggs and nutmeg on fruits, potatoes, chicken and fish.

The list goes on but remember the American Heart Association and the Dietary Guidelines for Americans support a long list of good foods. Take it from the old salt, there are no saltshakers in the mess hall, and no-one’s jumped ship yet!

How Does Coffee Really Make You Feel?