Heather Shepherd drove home from a bustling day at work, motivated by back-to-school energy and anticipating a relaxing night with her husband, Jim. What began as a routine ride home turned catastrophic when an oncoming car came into Heather’s lane as it attempted to avoid hitting the car in front of it. The force of that initial collision caused Heather’s sedan to spin 180 degrees, pushing her into another lane, where a vehicle abruptly broadsided her.

“I have hardly any memory of it. I remember seeing headlights, but that’s it. The next thing I knew, I was getting loaded into an ambulance,” Heather said. Heather doesn’t remember the crash’s impact but does recall the pain. “I was having an extremely hard time breathing,” Heather recalled. “When first responders asked if anything else hurt, I said to check my foot. It was cockeyed and really weird.”

“Our trauma center at Genesis contains the specialists, nurses, facilities and resources necessary to immediately care for traumatic injuries. If you’re bleeding to death, you can’t wait an hour, so we have a designated program to evaluate and expedite care immediately,” said Stuart Chow, D.O., medical director, Genesis Emergency & Trauma Services.

Upon Heather’s arrival at Genesis Hospital, the trauma team identified a life-threatening abdomen injury. Due to the accident’s force, Heather’s diaphragm was severely torn. Her stomach was pushing up through the tear and into her left chest. In addition, every rib on the left side of her chest was broken. She was in shock, in severe pain and having difficulty breathing.

“Heather received immediate surgery to repair the tear in her diaphragm. That night she also received surgery on her ankle to help it begin healing. She stayed in our Intensive Care Unit (ICU), with our teams watching her closely. With rib fractures, patients can slowly accumulate blood from the broken ribs, and that can become life-threatening,” Dr. Chow said.­­

That’s exactly what happened to Heather. Blood from within the marrow of the broken rib bones pooled around her left lung, collapsing it. James Adamo, M.D., pulmonary critical care, was called in to see Heather when her lung collapsed. “She had what we call a ‘white out,’ meaning no air was going to that lung at all.”

Dr. Adamo recommended surgically placing a chest tube to reduce fluid around the lung, and he performed bronchoscopy to dislodge and clear mucus blocking Heather’s bronchial tubes. Dr. Adamo, like other board-certified specialists at Genesis, collaborates closely with the trauma team to ensure patients receive personalized, expert care. “We strategically integrate our care, and patients benefit from us working together at an advanced level,” Dr. Adamo said. After the fluid around Heather’s lung drained, she started feeling a little better, but one major problem loomed: Every time Heather took a deep breath, her ribs moved, cracked and continued breaking. The pain was excruciating.

“We performed another surgery for Heather called rib fixation. We placed the ribs back in anatomical alignment and then screwed in plates to hold them in the correct position. We stabilized six ribs that way,” Dr. Chow said. This highly advanced surgery, which remains uncommon for Level III trauma centers, restored Heather’s normal breathing pattern and decreased her pain tremendously.

“The rib fixation surgery – like so much done for me at Genesis – was above and beyond,” Heather said. “Dr. Chow said he thought it would really help, and it did. In fact, it was an absolute game changer for me.”

Surgery and rehab close to home

Heather spent eight days at Genesis Hospital and endured five surgeries. She then stayed at a local rehabilitation facility before returning to her home in Nashport. “It meant so much to me to be close enough to my community so that my husband, friends and co-workers could routinely visit me. Having them there was a big part of my recovery,” Heather said. “There’s such peace of mind knowing that Genesis’ high quality care is right here in town for our moments of crisis.” It’s been a year of steady recovery for Heather, and she’s made remarkable progress. She resumed golfing and even ventured out for her first backpacking trip since the accident.

“We hear stories like Heather’s, about people returning to normal lives, and it makes everything we do worth it,” Dr. Chow said. “Because we’re the only trauma center in this area, we can make a big difference in the community – and that means a lot to me.” 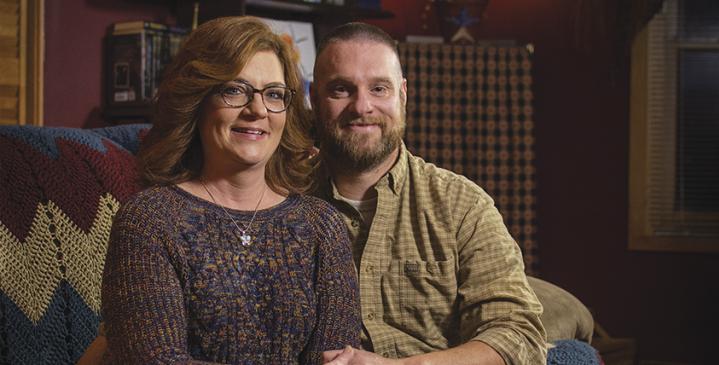