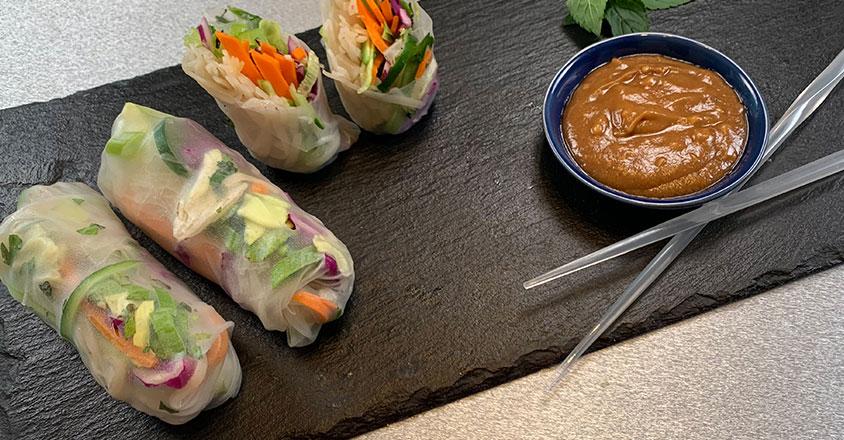 These spring rolls are refreshing, colorful and fun to make. The filling ingredients are flexible, and they make a fun, gluten-free meal. Cabbage is packed with nutrients, and peanut butter has been shown to positively affect blood sugar control and help decrease the risk of diabetes.

2 medium carrots, peeled and cut into matchsticks or sliced into strips with a julienne peeler

1 small cucumber, thinly sliced or sliced into strips with a julienne peeler

2 to 3 tablespoons water, as needed

To make the spring rolls:

Bring a pot of water to boil and cook the noodles just until al dente, according to package directions. Drain, rinse them under cool water, and return them to the pot. Off the heat, toss the noodles with the sesame oil and salt, and set aside.

Fill a shallow pan (a pie pan or 9″ round cake pan works great) with an inch of water. Fold a lint-free tea towel in half and place it next to the dish. Make sure your prepared fillings are within reach. Combine the green onion, cilantro and mint in a small bowl, and stir.

Place one rice paper in the water and let it rest for about 20 seconds, give or take. You’ll learn to go by feel here—wait until the sheet is pliable but not super floppy. Carefully lay it flat on the towel.

Leaving about 1 inch of open rice paper around the edges, cover the lower third of the paper with a few pieces of butter lettuce, followed by a small handful of rice noodles, some cabbage and a few strips of carrot, cucumber and jalapeño. Sprinkle generously with the herb mix.

Fold the lower edge up over the fillings, rolling upward just until the filling is compactly enclosed. Fold over the short sides like you would to make a burrito. Lastly, roll it up. Repeat with the remaining ingredients.

To make the peanut sauce:

In a small bowl, whisk together the peanut butter, rice vinegar, tamari, honey, sesame oil and garlic. Whisk in 2 to 3 tablespoons water, as needed to make a super creamy but dip-able sauce.

Serve the spring rolls with peanut sauce on the side. You can serve them whole, or sliced in half on the diagonal with a sharp chef’s knife.