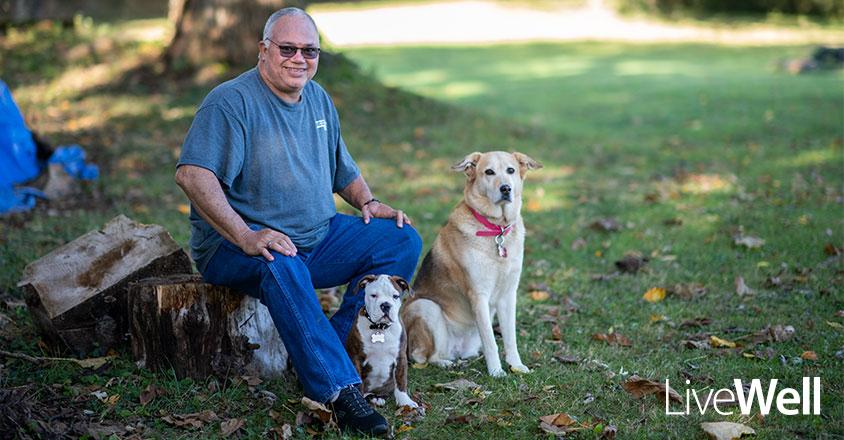 LiveWell Patient Story: Heart patient advises not to wait if something seems unusual

At first, it seemed like any other day. Karl Kirby, age 57, of Zanesville, had just finished doing laundry. And while he felt fine when he woke up that morning, as the day wore on, he began to feel worse.

“I had chest pain, and I was sweating profusely,” said Karl. “Then I realized I hadn’t eaten all day. I figured maybe I just needed some food.”

Karl ate a sandwich, but it didn’t help. So, he sat down to watch TV, thinking maybe he was tired and needed to relax.
That didn’t help either. He was running out of options and finally went to the bedroom to lay down. When his wife saw him, she was worried and asked, “Are you okay?” Karl realized he wasn’t, so they drove to the hospital.

When they got to the Emergency Department (ED) at Genesis HealthCare System, the care team immediately attached small electrodes to Karl’s arms, legs and chest to perform an electrocardiogram, also called an EKG or ECG, a device that monitors the heart.

Next, the care team rushed Karl to the Genesis cardiac catheterization lab (cath lab). Heart specialists can perform a full range of minimally invasive tests and advanced heart procedures using the most current imaging technology in the cath lab. This allows the doctors to diagnose and treat blockages and other problems in the arteries without patients undergoing surgery.

In the cath lab, Dr. Gabi placed two stents in Karl’s arteries, which opened the blockages causing the heart attack. The procedure involves inserting a tiny balloon into the blocked artery and then inflating it. Next, a stent (small mesh tube) was inserted to keep the artery open.

“As soon as the stents were placed, I felt normal again. There was no more chest pain.”

“Dr. Gabi called my condition a STEMI. At the time, I didn’t know what that meant. But now I know it’s the second most deadly heart attack,” said Karl. “As soon as the stents were placed, I felt normal again. There was no more chest pain.”

Don’t DIY your trip to the ED

When asked if he has any words of wisdom for others who might be experiencing chest pain or symptoms, Karl advises, “Do not drive yourself to the hospital. Call an ambulance. I learned after this happened to me – they have resources in the ambulances that can help until you reach the hospital.”

After Karl’s procedure, his care team recommended he go to the Genesis Heart & Vascular Cardiac Rehab Center to strengthen his heart. Karl began a program working on a treadmill and several other exercise machines. Karl explained he started using the machines for three minutes at a time, three times a week, then gradually worked up from there.

“It was awesome. The rehab group was top-notch, A #1. It really helped,” said Karl.

A letter from our President and CEO | LiveWell Summer 2022

One less thing to remember