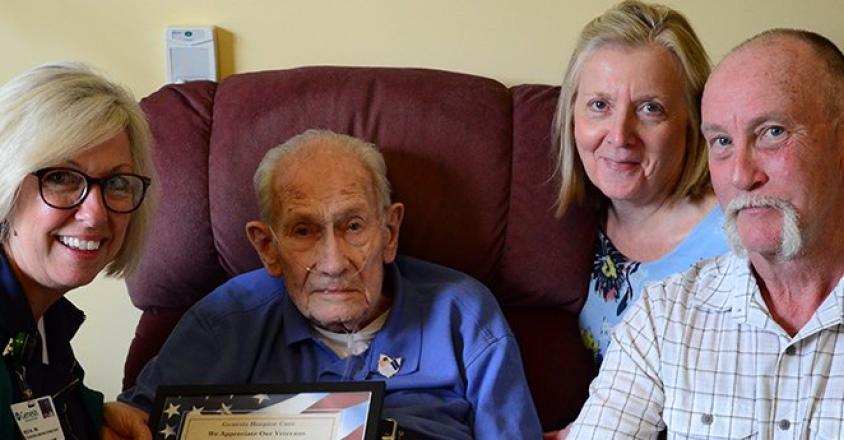 Zanesville, Ohio (July 3, 2019) – Ben Workman, 96, of Zanesville, was recently honored during a pinning ceremony as part of the “We Honor Veterans” program by Genesis Hospice Care. During World War II, Ben was a 20-year-old radio operator with the 7th Bomb Squadron in the U.S. Army Air Forces stationed in southern England. He and his crewmates flew 28 missions over Nazi territory. “Recognizing our veterans is important,” said Pam Workman, Ben’s daughter-in-law. “It’s wonderful that veterans are honored for what they did, and we appreciate that very much.”

Heidi Williams, R.N., marketing and volunteer consultant, Genesis Hospice Care, presented a pin and certificate to Ben. “The pinning ceremonies are a meaningful way to honor veterans for putting their lives on hold to serve others,” Williams said. Genesis Hospice Care is a level 4, the highest level of the program. The “We Honor Veterans” program addresses the unique needs of those who have served in the military by providing high-quality care to veterans, honoring and recognizing veterans for their service, providing education to Genesis staff and volunteers about the needs of veterans, and other services.